This website uses its own and third-party cookies that store and retrieve information when you browse. With your permission, Vall Companys will use cookies for analytical purposes and to show you personalized advertising based on a profile made from your browsing habits. You can click the "Allow cookies" button to give us your consent for us to carry out all the processing previously described or you can reject all cookies by clicking the "Browse without cookies" button.
You can consult our Use of Cookies and change your preferences before granting or denying your consent.

The Vall Companys Group operational model is based on the integration of all stages of the production process, and the work of dedicated professionals who are highly trained in their respective fields.

Also worth mentioning is the introduction of latest-generation information systems in all mechanical areas, which link and automate the group's various production plants.

Thanks to all this, we are able to guarantee total traceability in all processes, as well as high levels of food safety and constant optimal quality of the product.

We produce food. We create value for people. We respect the planet.

As one of the leading agri-food groups in Europe, the Vall Companys Group is very conscious of its responsibility towards the environment in terms of its business activities. For this reason, we have adopted a policy geared towards preserving environmental sustainability, guaranteeing the well-being of our animals, providing a safe and healthy working environment with future prospects for our employees, and offering consumers safe, high-quality food products.
We invite you to discover everything we do as a Group.

The Vall Companys Group began its activity with the purchase of the four mill "La Meta" in Lleida, which is dedicated to the production of bread flours (1956). Using by-products from the wheat mill, the company manufactured its first animal feeds. The first experience of integration in pig farming marked the creation of an innovative business model for Vall Companys, which was characteristic of the 1960s. The company began to enter the poultry sector. The foundation of the public limited company Vall Companys, and its establishment on the El Segre industrial estate, led to an increase in production volume and capacity (1970).

Development of an integration model, in which farmers provide facilities and labour. The rest of the services—animals, feed, veterinary control–are provided by the integrating company. The model was first used in the pork sector, and subsequently introduced in the poultry area. The increase in pork production led to an increase in feed production and distribution, from individual sacks to bulk orders. In a decade marked by sharp growth in livestock integration, the need for rigorous logistics management was met by the creation of Transegre, the Vall Companys Group's logistics company. In 1977, the company began to expand geographically, with the purchase of , a poultry and pig feed manufacturer in Vic (Barcelona).

The Vall Companys Group constructed a new flour mill with a capacity of 300,000 t/year; increased its own pig production to attain greater self-sufficiency in the supply of piglets (a precursor of traceability), and made its poultry market more vertical with the addition of its first abattoir, located in Tarragona (1984). The production of pharmaceutical products for veterinary use (in Mevet, the group's laboratory, and an independent internal auditor since 1989) ensured control of the medicines used in the Group from 1981 onwards.

Vall Companys Group invested in quality and health control in a market that prioritized and demanded food safety. The Group continued its process of geographic expansion in the manufacture of commercial mixed feeds for pigs and poultry throughout the peninsula, constructed the Pondex hatchery (Lleida), and purchased Agroturia (Valencia) in 1993. Integration of pig farming continued to develop, with an increase in the number of the Group's own pigs, and self-sufficiency in the supply of piglets. The first centre was constructed for the insemination of pigs (in Lleida), to totally guarantee full genetic control.

The verticalization of the business was consolidated with the incorporation of various abattoirs for pigs and cattle, including Patel (Vic), Cárnicas Frivall (Cuenca) and Frimancha (Valdepeñas), as well as poultry processing plants and abattoirs for poultry, namely Costa (Girona) and Torrent (Barcelona). A new feed manufacturer and artificial insemination centre for pigs called Agrocesa (Valladolid) was added to the Group. The verticalization of the poultry business was completed with the purchase of the French multinational Doux in Spain (Avidel and Avigal). In the area of bread flours, the distribution capacity and customer services introduced in the previous decade was expanded.

A period of greater contact with the consumer has begun. At the same time, large volumes are produced with a guarantee of quality, and the cost efficiency that characterizes the Vall Companys Group. Investments have continued in the industrial division, with the construction of a new feed plant in Ejea de los Caballeros and renovations in the abattoirs and poultry processing plants in Avidel and Avigal. The processed meat line has been boosted, as has the marketing of cured Duroc and Iberian hams and shoulders.

The companies in the Vall Companys Group make up a completely integrated production and commercial process at all stages, from reproduction, feed production and animal rearing, to slaughter, meat processing, packaging and distribution of the end product, as well as all complementary processes (veterinary pharmacy, integrated logistics, etc.).

This policy of verticalization and integration means that any product can be fully traced from its source, and ensures the constant quality of the entire production line. In addition, the companies in the Group meet demanding standards for certification and health controls, which are a guarantee of hygiene and integrity. 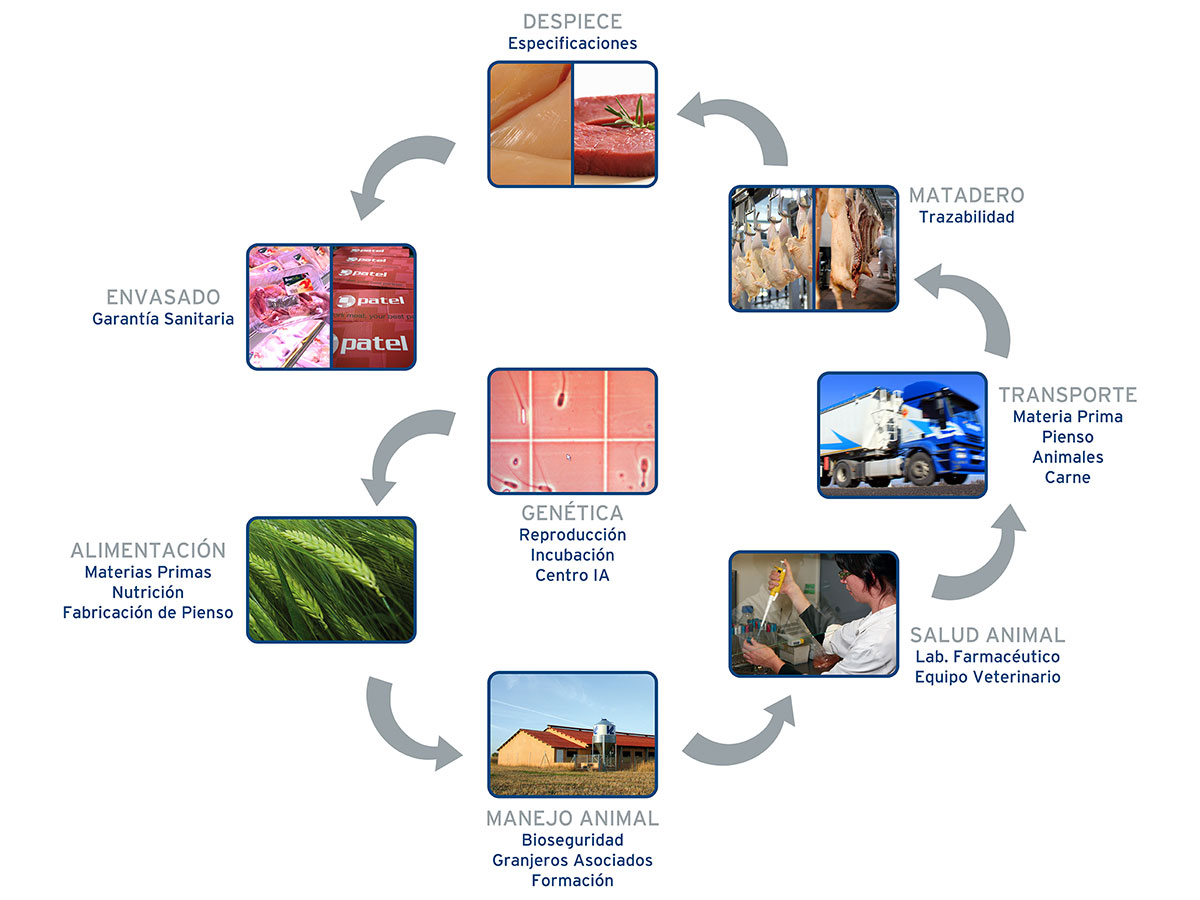 R&D&I activities are pivotal for the use of knowledge and technology in the different production phases of the Vall Companys Group, the aim being to design technical processes and innovative products that reflect significant advances in quality, health, well-being, efficiency and sustainability.

The Group has a multidisciplinary team of experts in its different business areas who, in collaboration with other companies, research centres and universities, are responsible for developing a range of different R&D&I projects.

There is a corporate commitment to R&D Intensity (ithe amount earmarked for R&D&I as a percentage of total net sales) which is estimated at more than 0.5%.

The projects carried out in recent years with the support of public funding are laid out here:

COMPANIES IN THE GROUP

The range of companies in the Vall Companys Group cover every stage in a fully integrated production system. In addition, 2,100 associated farms collaborate with the group. They are responsible for rearing the animals and are situated close to the abattoirs and meat processing plants to ensure a high level of animal welfare during transport.

The geographic location of the different companies and facilities of Vall Companys covers the entire Iberian Peninsula and the Canary Islands, which optimizes the quality and logistics of the group and ensures a uniform, efficient distribution throughout Spain. 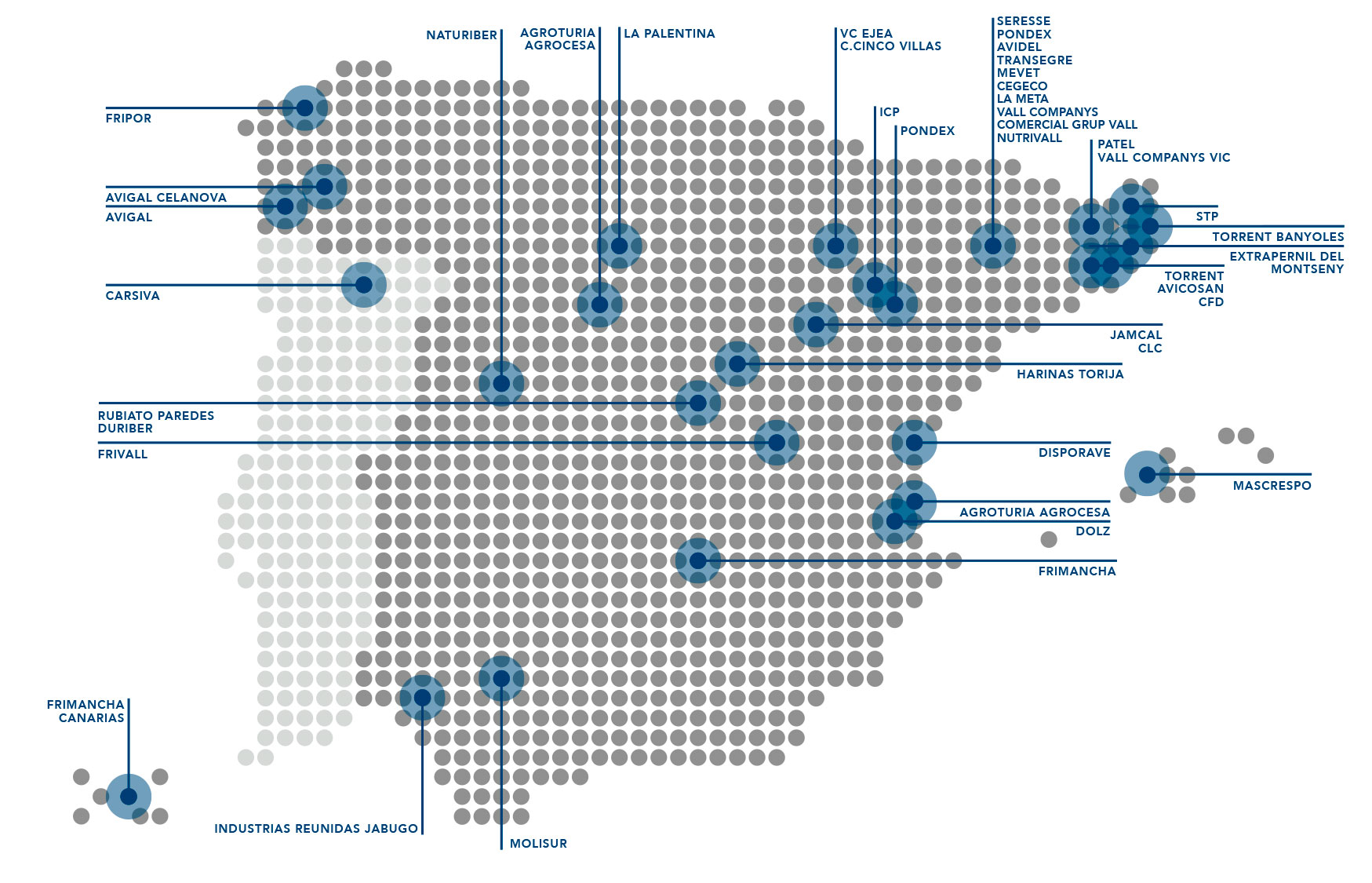